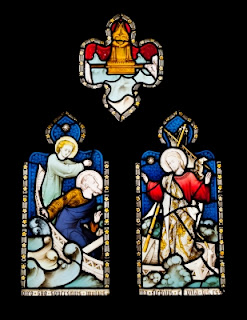 Morning all! It's time for another installment with Fr. Darryl Millette, and I received *wonderful* feedback about part 1 of my talk with him. Fr. Darryl is such a natural writer! The thought he put into each of his answers really shines through. Don't forget to follow him on Twitter to hear more of his thoughts and talk with him one-on-one (@frdarryl), and check out his website, Saskapriest, which includes audio files of his homilies, and a link to his fabulous SportsFathers podcast!

And so without further ado, here is the rest of my interview with Fr. Darryl:

What has been your favorite experience so far as part of your priestly ministry?

Leading a parish through Holy Week (which I’ve done on my own 5 times now) is simply amazing and physically draining and an incredible shot-in-the-arm to my faith. This has been especially true on those occasions where I’ve been able to bring an adult into the faith through baptism and confirmation. Those Holy Thursday/Good Friday/Easter Vigil rituals are some of the most beautiful things that exist on this planet. No question.

I also love presiding at the other Masses in my parishes.

Hearing confessions is perhaps where I most feel like a priest. It is incredibly humbling to pray the words of absolution, knowing how much and how often I need to hear those words myself. But then to know that Christ has released someone from their sins through my being there in the confessional is an indescribable feeling.

I love being able to meet my people in my small, rural community as I walk my dog. :-)

What has been the most challenging part of being a priest?

There are often very many commitments to keep straight in my (often scattered) brain, including many meetings and committees on parish and diocesan levels. While they are necessary, they can strap my energy.

Generally speaking, I am an introvert and so it takes a good deal of effort to be with large numbers of people for an extended period of time. I like my quiet time. But I’ve learned to pace myself with this, too.

Driving can be a bit of a chore sometimes.

Dealing with my own weaknesses and not getting discouraged by them can be challenging as well. This is where a spiritual director/confessor is not a luxury: he’s a necessity.

What is one unique thing about you and/or your ministry that readers would find interesting?

Well, I’ve mentioned my engineering background already, which has amazingly come in handy on a number of occasions. Don’t ask me to do calculus though - I’m way out of practice on that.

I also like my sports. I play hockey and follow the NHL (sadly, the Flames are pretty brutal this year). I have a deep passion for the Saskatchewan Roughriders of the CFL - as does everyone else in this province. I’m sure it’s in our DNA.

I have a three-and-a-half year-old Soft Coated Wheaton Terrier named Chloe. She mostly runs my life. And in her extreme patience and unflappable loyalty she has revealed to me incredible glimpses of those aspects of God.  She also has a habit of taking up 3/4 of my bed by the morning… #spoiledrotten

Can you describe your prayer routine and how you balance it amongst your other responsibilities?

Not to cop out on this question, but I had read the response that Fr. Kyle Sanders wrote prior to writing my own response. I’d love to just copy his, because it’s basically the same for me!

The cornerstone of my personal prayer life is the liturgy of the hours. If I’m late in praying a particular hour (which perhaps happens more often that I’d like to admit), something just seems off-kilter. It is a huge blessing to be able to take a few minutes at certain, set times of the day and to just be with God through the praying of Scripture. In addition, the longer readings from Tradition in the Office of Readings often gives me a good deal to meditate on. The intercessory prayer at Lauds and Vespers reminds me to pray for others.  And it’s generally a tremendous comfort to know that the exact psalms that I pray are being prayed by other priests, religious, laity, the Pope, etc. It reinforces in my mind the reality that I’m/we’re not alone, even if it’s just me and the dog in the rectory…

Mass is also essential, of course. :-)

Many Catholics do not frequently avail themselves of the Sacrament of Reconciliation. How do you prepare to administer this sacrament, and how would you advise Catholics who wish to return to this sacrament after many years away?

As I answered in the discernment question, I’d say… don’t be afraid. The priest understands sin, mainly because he’s a big ole sinner himself. He isn’t there to judge you but to welcome you back. And he’ll help you through it if you forget what to do.

Yeah, confessing sins can be pretty darn hard. It’s not easy for me to humble myself before another priest when I go to confession. It’s never easy to voice out loud those sins that I know in my heart are blocking me in some way from God.

Yet, sin is ultimately rooted in pridefulness, at some level. Therefore, how appropriate it is that we are asked to be humble in confession - even if just for a few minutes - and to let God be the healing God that he is?

And - confession is usually about 3-5 minutes. It could be longer or shorter. But generally speaking, it’s just a few minutes of humble awkwardness, followed by the most amazing feeling of being completely free that you’ll ever have!

What is one way in which Pope Francis has had a positive influence on your ministry since his election?

Pope Francis has immensely challenged me to be more kind, more gentle, more accepting, closer to people, more self-aware, a better preacher, and more prayerful… among other things. And when I see him I realize that I have a lot more work to do in all of those areas. A LOT more work to do. :-)

Oh oh! Once again, this was so, SO lovely!! Fr. Darryl, you should write a book. :) I very much relate to Father's thoughts on confession - I, like many others, in a sense *dread* this sacrament, because it definitely involves a level of awkwardness! There is, however, no greater deterrent to recommitting those sins than knowing that you would have to go back to the priest to confess them again. :0 But hearing about it from a priest's perspective, that they too are humbled by the experience of even hearing confessions because it reminds them of the need for their own, really brings the point home that we should not let ur fears keep us away from this wonderfully freeing sacrament.

I am also so touched by Fr. Darryl's remarks on the Liturgy of the Hours. As the official prayer of the Church, it is incredibly beautiful to think of countless others around the world praying the exact same psalms, scripture and other prayers as you are on any given day.We are never alone, even when we are by ourselves in our own living room, with an incredibly adorable dog at our side. :)

Fr. Darryl, thank you SO much for being a part of Vocations Spotlight! It was a joy to speak with you! I hope to have more installments in this series after the holidays, but I do not have anyone else lined up right now. If you have someone you would like to suggest, leave me a comment!


*Photo courtesy of artur84, at FreeDigitalPhotos.net
Posted by Tiffany at 9:57 AM