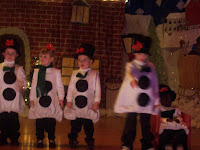 That's my precious angel, third from the left. He did such a wonderful job last night. He took his duties *very* seriously :) Naturally, as soon as the curtain opened, I started bawling. Unsurprising, I know. He was just so, so precious and angelic. He also got to sit on Santa's lap: 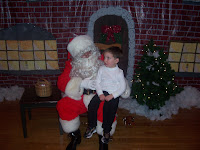 Really weighing down Santa's knee, huh? :) He's such a big kid, but I swear, he's ours :) I was just so proud of him. In bonus news, he told us both before and after the program that he had to go pee pee, and then he sat on the potty and went. It's just raining toddler good news today.
Posted by Tiffany at 2:11 PM

Email ThisBlogThis!Share to TwitterShare to FacebookShare to Pinterest
Labels: parenting