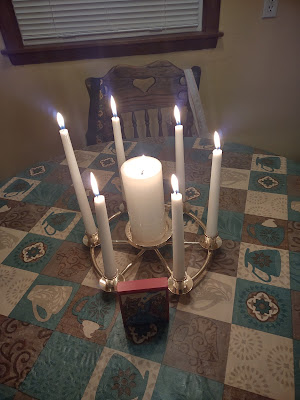 Hello all, and happy mid-January! It was a bit of a tough week for your Catholic Librarian, but I'm persevering. The new year is starting off with a bit of an element of stress, but we'll get there.
This past weekend we were once again back at Divine Liturgy, with the worship space still happily decorated for Christmas. The end of last week featured the feast of the Theophany, or the baptism of Christ, in the Eastern Church. I didn't make the connection until last Sunday that the Eastern tradition of Theophany is so connected to what we would call the Epiphany in the Western Church. When I think of the Epiphany I think of the Magi bringing gifts to the infant Jesus, which is separate from the celebration of the baptism of Jesus in the Western Church, usually the weekend after Epiphany. But it looks to me like in the Eastern Church, they celebrate these both as revelations of Christ's incarnation. I'm still learning about all of this, so I'm definitely making some surprising connections along the way, and not always making those connections particularly quickly!
I did have all of our Epiphany candles lit for the feast on January 6th, and look at how beautiful! I cherished having this Eastern style wreath this year, I was so sad to tuck it away in storage until next year. The table feels empty without it. We have our Theophany icon displayed until the next Great Feast (Candlemas in early February): 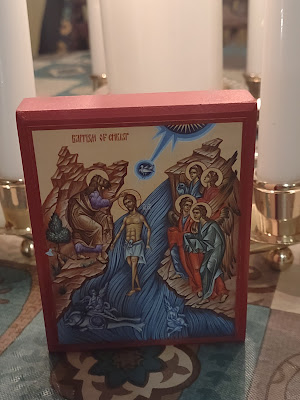 And given the focus on baptism this week, I was delighted to hear in Father's homily his mention of the holy water vat being refilled in the back of the church, that we are welcome to collect in our own containers and bring home with us. One of the things I missed the most during the pandemic was the holy water fonts in the entrances to our Latin rite parish! I love having holy water in our home. Eastern Catholic Churches, in my limited experience, do not have this tradition, but they still value and bless water and offer it to their parishoners. So I'll be bringing my bottle in for a refill! Father even mentioned that holy water can be consumed, which I didn't know and never even thought about!
Another focus last Sunday that accompanies the feast of Theophany in the Byzantine tradition is house blessing. I LOVE THIS. I overheard a few people asking Father to come bless their houses. I need to get in on this action next year, I was too afraid to ask this year since we're so new. 😂
So our first Theophany was a resounding success! I also enjoyed praying the Liturgy of the Hours for the Epiphany, and then concluding the Christmas season on Monday with the feast of the Baptism of the Lord in the Latin rite. 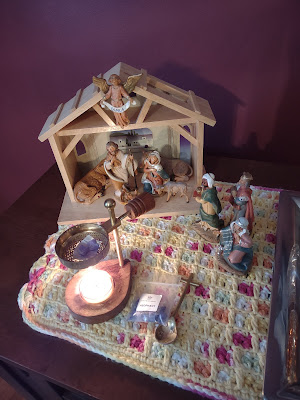 My little blending of East and West is going well. How was your Epiphany/Theophany last weekend? 😀