Lenten Book Club Week 3: Trials of many kinds, including the dreaded Plague... 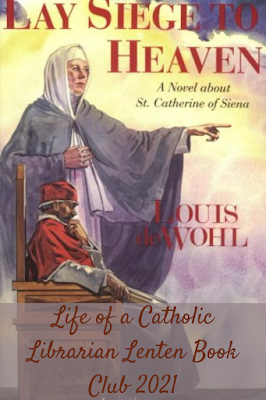 Happy Friday, everyone! Wow, Lent is really moving right along, isn't it? We're getting our first fish fry tonight, and I'm really looking forward to it. :) I'm also midway through my teaching commitments for the spring semester, and feeling quite relieved about that. Vaccination rates are ramping up nicely here, the sun is out more, and I'm generally feeling more hope for the future!
And so here with are in our third week with St. Catherine of Siena and our book club for Lent 2021! I have to admit that this part took me by surprise a bit in that it was the longest so far, so I didn't budget my time for it well at the outset. I literally just finished reading it prior to opening my laptop and starting this post, LOL! I also found this part a bit harder to follow with all of the political stuff ramping up, and I am *terrible* with names, so I was getting confused quite easily with the sheer volume of new names introduced in this section. I'm only finally remembering Fra Raymond and Fra Bartolomeo, her Dominican friar friends. But I digress, overall the content was just as interesting as it's been all along!
We start out with Catherine's trial before the Master General of the Dominican order over these accusations that Catherine has acted in an untoward manner with the townspeople of Siena. Catherine is patient and humble throughout the proceedings, and many priests come to her defense. I thought it was touching how she mentioned that of the two possible outcomes, neither was a bad one: she will either be totally exonerated, or she will be found guilty, and if so, it must be the Will of God, thus how could that ever be a bad thing? In the end, she is fully acquitted!

Back in Siena, the plague has struck, and I have to admit, given the current global pandemic, this brought on a fresh set of chills. Lots of Catherine's family fall prey, including many of her nieces and nephews, which is heartbreaking. Catherine is unafraid and right out there in the field, aiding the sick and dying in their last moments. We have some quite dramatic things occur here in which Catherine is a part of God's plan to heal two priests who contract the plague. The entire experience softens the heart of Catherine's mother, now a widow, and she joins the Mantellates. So sweet! We also have Maria Gambacorti, the young daughter of a very important man in Siena, entering the Dominicans as a postulant, a real boon in the religious life here!

The next major part addresses Catherine visiting the cell of a condemned man awaiting his death sentence to try and save his soul. This scene goes on for a lot longer than I expected, and I have to say that I found it very had to read. The man is young, and Catherine takes an immediate shine to him as a brother. It's quite touching, and ultimately he repents and receives confession and the Eucharist, and Catherine is there for him every step of the way at his request, including at the execution site. I was in tears by the end, thinking of my own son, given this man's age. This was so, so tough, but very moving.

And finally, in the last part of Book 3, I was struggling a bit to understand fully who was who and what was going on. From what I could tell, Florence and other nearby cities are beginning to rebel politically, wanting a new government, and are also aligning against the pope. Catherine wants to visit some troops who have encamped near Florence, whose leader is this well known successful, but extremely brutal guy, to try and convince them to fight for the side of the Church, but she is denied permission by the archbishop. So she sends her two Dominican priest friends instead, and this part is quite endearing and humorous with their talk amongst themselves of their presumed upcoming martyrdom. When the leader reads Catherine's letter, he is swayed to her side. This is good (ish?) news, but then Siena also decides to align with the rebels.

At the very end of this section, the new list of cardinals comes out, and includes only 1 Italian, the rest are all French save for a single Spaniard. Catherine then decides to write to the pope in Avignon.

OK, so I have peppered my summary with my main commentary on my overall feelings regarding this section. I found it very poignant, some real pearls of wisdom in here about faith, that I know will stick with me long after I finish this book. At the same time, I found other parts a little harder to move through and easily keep track of what was happening. What were your thoughts? I would love to hear them in the comments!

My Kindle tells me I'm about 65% of the way through the book, and I know Book 5 is somewhat shorter than the others. Thus, I'm expecting Book 4 to be comparable in length to Book 3 and will plan accordingly. ;-)