A reading list as we head into Labor Day weekend...

Happy early September all, and somehow we are moving into the weekend that heralds the unofficial end of summer. I will grant, this was the most emotionally exhausting summer of my life, and I'm thinking you all feel the same. I will admit to feeling a bit discouraged at this time. I'm trying not to dwell on it too much because there is literally nothing I can do about it that I'm not already doing. And getting myself re-upset is not helping me or anybody else. So I'm trying.

I've been reading more, and as a librarian and lifetime lover of books, I realized how much I had gotten away from it since the pandemic started, yet how valuable it is for my mental health. It's like my brain has a harder time shutting real life down now so that I can escape to my happy cozy fiction worlds. I've been making more of an effort to do that, and keeping up with these little reading lists here on the blog is motivating me to keep moving through my Kindle queue (which is CONSIDERABLE :-0).

So this week I finished Botched Butterscotch (which was a novella, so super short! Very cute too, involved a theft, not a murder), and embarked on the next book in the series (the newest installment!), which is Marshmallow Malice: 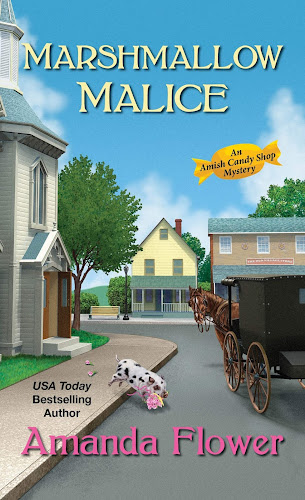 Caught in a sticky situation . . .

With Juliet Brody and Reverend Brook tying the knot in Ohio’s Amish Country’s most anticipated nuptials of the year, Bailey King is determined to do everything in her power to make the event a sweet success. Except midsummer heat waves and outdoor ceremonies don’t mix, and an exasperated Bailey soon finds herself struggling to fulfill bridesmaid duties and keep her stunning marshmallow-frosted wedding cake from becoming a gooey disaster. Then much to everyone’s shock, the entire ceremony crumbles when a guest drops dead, and the cause isn’t sunstroke . . .

Turns out, the uninvited victim came equipped with lots of dirt on the devout reverend’s hidden past. As Reverend Brook tops the murder suspect list on what should have been the happiest day of his life, Bailey and her sheriff’s deputy boyfriend vow to clear his name. Can the duo boil down a series of baffling clues before Juliet considers her marriage a bad mistake—or the killer whips up another deadly surprise?

This book is just delightful. I love the setting and the characters. I'm already about 25% of the way through!

Also this week, I have a new download, which is Grilled for Murder (a Country Store Mystery): 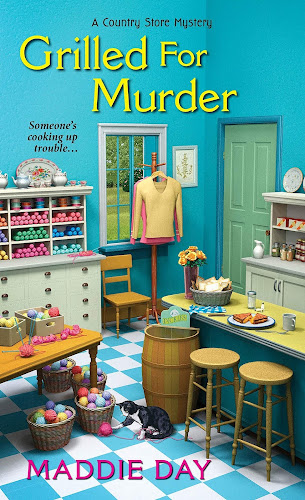 Robbie Jordan may have had reservations about the murder victim, but she still needs to turn up the heat on a killer if she wants to keep her new restaurant open for business . . .

In the charming small town of South Lick, Indiana, Robbie has transformed a rundown country store into the runaway hit Pans ’N Pancakes. But the most popular destination for miles around can also invite trouble. Erica Shermer may be the widow of handsome local lawyer Jim Shermer’s brother, but she doesn’t appear to be in mourning. At a homecoming party held in Robbie’s store, Erica is alternately obnoxious and flirtatious—even batting her eyelashes at Jim. When Erica turns up dead in the store the next morning, apparently clobbered with cookware, the police suspect Robbie’s friend Phil, who closed up after the party. To clear Phil and calm her customers, Robbie needs to step out from behind the counter and find the real killer in short order . . .

This is just $1.99 right now for Kindle, and I found out about it via the Kindle Daily Deals newsletter, so if you're not signed up for those already, you may want to consider doing so. ;-) I love finding new books for less than $2!

Are you reading anything new this week? Have any plans for Labor Day weekend? I'm planning to plot our fall community novenas next week, so stay tuned for next Friday's post on that topic! :-)