So, I think we can officially say that this is "one of those weeks." It's been tough. The main thing, of course, being our worry for my sister and her family with the fire that they had at their house. My brother-in-law, Ken, wrote up an account of how the fire started, and even though the issue is far, far from funny, his sense of humor came through and it made me laugh despite the gravity of the situation.

The fire started from embers in their outdoor grill; apparently, some leaves blew over and caught on the embers, and then the wind blew them up onto their wood shingled house. It was just a weird perfect storm of events. So, the side of their house is on fire, and they have absolutely no idea until their son's smoke detector goes off in his bedroom, ground zero for where the leaves blew. They all immediately got out of the house, thank God, and Ken's description of his one man struggle with their beleaguered, leaky, garden hose while they awaited the fire department just really made me giggle despite the horror.

They're all doing pretty well though, all things considered. The insurance company has already begun the process of inventorying and clean-up, and they have some preliminary plans for how the house will be fixed up, so that's all good.

So, then, yesterday, I was eating lunch and happened to travel over to one of the message boards I participate in. I hadn't been there in at least a month; I've been spending more time blogging during my breaks, and just hadn't had a chance. Well. Come to find out, something happened that I always knew would happen, and wondered how that play out in the new online world we all live in. That is, one of the frequent posters on that board passed away. It was shocking and upsetting. The only reason we all found out what happened was through a few board members who knew her in real life.

And it's all so odd, because I don't know any of these women in the true sense of the term. But, in a completely different, and still meaningful way, I do know these women. People share their lives there, and given that it's an online community devoted to Natural Family Planning, we discuss some pretty personal stuff. It was very jarring to learn that this woman had died and that she just won't be posting there anymore. Sad, sad stuff. She was only 54 years old.
Sigh. So, hard to get uplifting on that note, but we do what we have to do.

I did finish another hat. The other hat...it just wasn't doin' it for me. It looked like the hat was squeezing all the blood out of my brain. It was just too small. I actually had a hard time hearing while wearing the hat. That just sounds dangerous. We'll call hat #1 "The Blood Sucker."

So, I started another one, with the same yarn, and immediately noticed something. Once again, I was creating something afflicted with gigantism. What is wrong with me? Well, actually I can answer that question. I don't check my gauge, and when I only made afghans and scarfs it really didn't matter. Now that I'm moving on to clothing items, I need to change my anti-gauge attitude. I don't care if my afghan is bigger than the one in the pattern, but I do care if it looks like I have a freakishly gigantic head. So, I pulled it out, used a smaller hook, and all seemed to go better. Here are the results, taken in my office minutes ago: 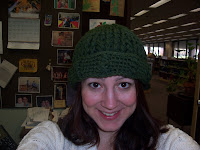 I'm pretty happy with it, actually. The alleged "no dye lot" yarn is clearly different where I changed skeins *glare in Red Heart's general direction* but in the natural light it's not bad. So, it's not a perfect hat, but it's a darn cute hat, and that's all I'm going for. We'll call hat #2 "The Green Wonder."

I'm now embarking on a shawl for my friend Irena, and then I need to get cookin' on a hat and scarf for my husband. He's starting to clamor for his stuff, and the weather is getting colder.

I know I was going to blog about something else, but I can't remember, so alas. It's just one of those weeks. I'm pretty scattered. But here's a picture of Henry, from his 4th birthday party: 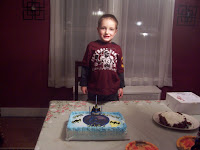